What Are The Major Risk Factors For Brain Metastasis

Scientists do not yet know why breast cancer is more likely to spread to some parts of the body than others, but some factors that increase the risk of spread to the brain have been identified:

The risk for developing brain metastases is higher in patients with more aggressive subtypes of breast cancer, including HER2-positive disease.

“The more recent estimates say that as many as half of patients with metastatic HER2-positive disease will develop brain metastases over the course of their lifetime,” said Nancy U. Lin, MD, of Dana-Farber Cancer Institute in Boston.

A 2018 retrospective Belgian study identified several risk factors associated with increased risk of brain metastases in these patients, including age younger than 40, tumor size greater than 2 cm, nodal involvement, absence or late start of anti-HER2 treatment, and development of a lung lesion as the first site of relapse.

“What is unclear is how many of these factors are independent factors versus them going along with the HER2-positive and triple-negative subtypes of the disease,” Lin said. “We just do not fully understand the basis for this increase in risk.”

Historically, patients with brain metastases have been excluded from most clinical trials and registration studies, Lin said.

Because of this, effective treatment of brain metastases remains an unmet medical need among women with HER2-positive breast cancer.

“In some cases we may even see patients living 5 years or longer with brain metastases,” Lin said.

Which Breast Cancer Type Has Greatest Risk Of Brain Metastasis

Specifically, about one third of women with ERBB2-positive disease and nearly one in four with triple-negative breast cancer will develop brain metastases that require radiotherapy. Those with TNBC also developed intracranial involvement in the shortest time from diagnosis of metastatic disease.

The study was in JAMA Network Open.

Brain metastases remain a significant cause of morbidity and mortality in women with breast cancer but currently guidelines do not recommend patients undergo neuroimaging to screen for brain involvement in women with early or metastatic breast cancer.

The researchers reviewed Ontario-wide health administrative data to identify the cumulative probability of patients receiving radiotherapy for brain metastases among women with de novo metastatic breast cancer as well as the time to develop brain metastases following their diagnosis.

Read Also: What Is The Survival Rate Of Triple Positive Breast Cancer

Breast Cancer Spread To The Brain: What You Need To Know

When breast cancer spreads, or metastasizes, its more likely to travel to some parts of the body than others. The most common sites of metastasis include the bones, brain, liver, or lungs.

Its rare for patients with early-stage breast cancer, which has not spread beyond the breast or adjacent lymph nodes, to develop a brain metastasis: The brain is the first site where breast cancer spreads in fewer than 5% of these patients.

Among patients diagnosed with breast cancer that has already spread, however, between 10% and 50% develop a brain metastasis, depending on the subtype of breast cancer and other factors.

At Dana-Farber/Brigham Cancer Center, the Program for Patients with Breast Cancer Brain Metastases in the Susan F. Smith Center for Womens Cancers provides care from a team of experts including medical oncologists, radiation oncologists, neurosurgeons, neuro-oncologists, neuroradiologists, and pathologists. Patients receive a personalized treatment plan based on their unique situation and the specific nature of their disease.

How Is Brain Metastasis Diagnosed 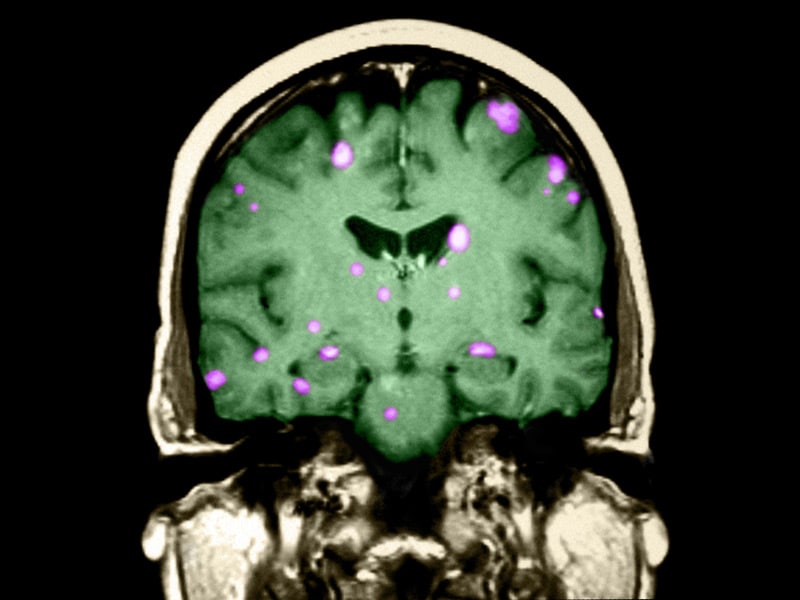 If your symptoms suggest the presence of brain metastasis, your doctor can use a variety of tests to make a diagnosis.

Initially, blood tests will be ordered to get an idea of your overall health and the function of various organs. These can include:

The treatment thats recommended for brain metastasis can depend on a few factors, including:

There are several potential treatment options for brain metastasis. Doctors generally divide these treatments into two categories: local and systemic.

About The Medical Reviewer

Dr. Lin is a medical oncologist specializing in the care of patients with all stages of breast cancer. Her research focuses upon improving the outcomes of people living with metastatic breast cancer, including a particular focus on the challenge of breast cancer brain metastases. She has led multiple clinical trials which have led to new treatment options for patients with breast cancer that has metastasized to the brain.Dr. Lin received her MD from Harvard Medical School in 1999. She completed her residency in internal medicine at Brigham and Women’s Hospital and went on to complete fellowships in medical oncology and hematology at Dana-Farber. In 2005, she joined the staff of Brigham and Women’s and Dana-Farber, where she is a medical oncologist and clinical investigator in the Breast Oncology Center.

Symptoms Of Her2+ Metastatic Breast Cancer

Combination Of Systemic Therapy With Radiotherapy

Although the anti-HER2 tyrosine kinase inhibitors appear to offer better intracranial disease control compared to the antibodies, local interventions will probably continue to be required for local control and symptom relief. Data informing on the efficacy and safety of anti-HER2 therapies plus radiotherapy are scarce.

Trastuzumabs combination with WBRT in a small cohort of 31 patients appeared to be safe and effective, with an intracranial ORR of 74.2% and a median time to BM progression of 10 months . No comparative results to either trastuzumab or WBRT alone are available thus, it remains unclear whether the combination is indeed more beneficial than any of the interventions alone.

In light of recent studies showing beneficial activity by anti-HER2 drug combinations containing tucatinib or neratinib, and a lack of comparative data, it is impossible to assess the proper timing and place, if any, of the lapatinib/radiotherapy combination, or to state whether the novel TKIs would be more efficient in this context.

Talking To Your Healthcare Provider

It is crucial that you talk to your oncologist and healthcare team about any and all symptoms you are experiencing. Some of these symptoms, such as pain, are under-treated in people with metastatic cancer. This is not because healthcare providers fail to treat the symptoms, but because they are simply unaware that a person is coping with them.

With all of the talk about people with cancer being brave or strong, you might hesitate to share symptoms that could make you appear frightened or weak. Yet facing metastatic cancer is frightening, and being able to share your concerns is a sign of strength, not weakness. There is a lot that can be done to ease most of the symptoms of metastatic breast cancer, but the only way that your oncologist can know what you are feeling is if you are brave enough to speak up.

In addition, sharing your symptoms, even if they may seem of little consequence to you, may help your oncologist better recognize the extent of your disease, anticipate potential complications, and suggest the best possible treatments for your disease.

You May Like: How To Know If You Have Breast Cancer

Large molecules greater than ~600 Da may not cross an intact BBB due to their size.13,14

Images are for illustrative purposes only and are not to scale.

Images are for illustrative purposes only and are not to scale.

Patients with metastatic HER2-positive breast cancer who later develop central nervous system metastases comprise a large population of all patients with breast cancer, and there continue to be an unmet need for this subgroup, explained Brian Czerniecki, MD, PhD.

Patients with metastatic HER2-positive breast cancer who later develop central nervous system metastases comprise a large population of all patients with breast cancer, and there continue to be an unmet need for this subgroup, explained Brian Czerniecki, MD, PhD.

are a reasonably lethal event for women with breast cancer. Of all the patients who present with metastatic breast cancer, about 40% of them will ultimately develop brain or CNS metastasis. It’s a subpopulation, but it’s a significant subpopulation that has a lot of morbidities associated with , said Czerniecki.

The recent FDA approval of tucatinib , however, has helped to supply this patient population with another treatment option, he added.

In April 2020, the FDA approved tucatinib for use in combination with trastuzumab and capecitabine for the treatment of patients with unresectable, locally advanced, or metastatic HER2-positive breast cancer. This included patients with brain metastases, following at least 1 prior antiHER2-based regimen in the metastatic setting.

OncLive: Could you discuss the prevalence and current treatments for patients with HER2-positive breast cancer and brain metastases?

Data from the SystHERs study, a real-world analysis of 977 patients with HER2+ MBC.3

Patients with CNS metastasis also progress more quickly than those without, requiring a faster transition to the next line of therapy3

*Based on a retrospective review of electronic medical records from 86 of 165 patients with HER2+ MBC with brain metastases.1

In 226 patients with HER2+ MBC who developed initial brain metastases after MBC diagnosis.2 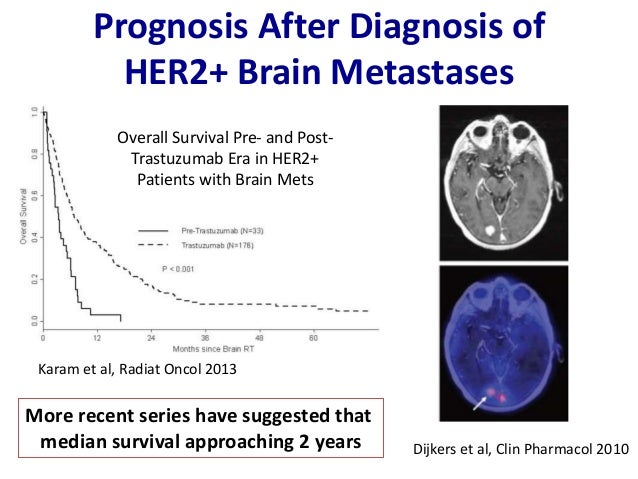 Overall, brain metastases occur in 15% to 24% of women with metastatic breast cancer. As survival improves, however, this number is expected to increase.

Read Also: Can You Have Breast Cancer Without Symptoms

Recap: Updates In Treatment Of Her2

At an Around the Practice® event hosted by CancerNetwork®, experts spoke about updates in the treatment of patients with HER2-positive breast cancer. The discussion was led by Sara A. Hurvitz, MD, medical director of the Jonsson Comprehensive Cancer Center Clinical Research Unit, codirector of the Santa Monica-University of California, Los Angeles Outpatient Oncology Practices, director of the Breast Cancer Clinical Trials Program at UCLA, and an associate professor at the David Geffen School of Medicine at UCLA.

Additional experts included Stefania Maraka, MD, assistant professor in the Department of Neurology and Rehabilitation at the University of Illinois College of Medicine at Chicago in Illinois, and Ruta Rao, MD, director of Coleman Foundation Comprehensive Breast Cancer Clinic, medical director at Rush University Cancer Center, and assistant professor in the Department of Internal Medicine, Division of Hematology, Oncology, and Cell Therapy at Rush Medical College in Chicago.

You May Like: Does Breast Cancer Show In Blood Work

Brain metastasis in metastatic breast cancer can be silent, and it is fairly common for patients to be asymptomatic. But mBC has substantial direct and indirect costs for patients, insurance payers, and society. The goals of therapy for mBC with brain metastasis are to improve symptoms, stabilize or reduce the tumor burden, maintain quality of life, and improve overall survival. New therapies can provide value by reducing the risk of distant metastasis, preventing central nervous system relapse, and improving quality of life. This article discusses the risk factors, comorbidities, diagnosis, economic burden, and treatments for brain metastasis in mBC, based on recent Insights video interviews with Kevin Kalinsky, MD, MS Sarah Sammons, MD and Bhavesh Shah, RPh, BCOP. To watch the full interviews, visit ajmc.com/insights.

OVERVIEW AND BURDEN OF BRAIN METASTASIS IN METASTATIC BREAST CANCER

According to Bhavesh Shah, RPh, BCOP, HER2-positive breast cancer is a very aggressive disease. It is second only to nonsmall cell lung cancer in causing brain metastasis. An estimated 60% of the deaths of patients with HER2-positive disease are from progression to the brain, said Shah.

What Are The Symptoms Of Breast Cancer Recurrence